The Luxmoore family's connections with Broadwoodwidger

This account of the Luxmoore family’s connections with Broadwoodwidger draws almost exclusively on an extensive history of the family entitled The Family of Luxmoore, published by Charles Frederick Coryndon Luxmoore F.R.G.S., J.P. in 1909.  Whilst this is a magnificent piece of research work, it does contain some inconsistencies between the narrative and the family trees, and I have tended to rely more on the latter.

After extensive research, the author concluded that the name of Luxmoore derived from a piece of moorland called Lukesmore, in the Parish of Lydford, close to Brentor.  He found a reference to a Jordan de Lukesmore from 1296-7.  Lukesmore meant “more of Luc”, with “more” in Vestigan’s Decayed Intelligence of 1605 meaning “dwelling by a moor or mareish ground”.

By 1431, a member of the family, John Lukesmore, was living in Bratton Clovelly, then known as Bracton.  By the mid-1500s, the name had become Luxmore, when another Johannis or John Luxmore was recorded in Bratton Clovelly.  He was not a free tenant, but it appears that he may have married into the Moore family for his yeoman son, Thomas (d.1606), was recorded as living at and owning ‘Moreston‘ (or Moore’s Town) (perhaps now Morson Farmhouse) and Thomas’ widow, Mary, referred to herself in her will of 1611-12 as ‘Luxmoore’.  Thenceforth, the family were known as Luxmoore.

Thomas and Mary’s grandson, Thomas (baptised 28/3/1610, buried 29/6/1636), acquired off John Moore of Moore, Broadwoodwidger, a lease on lives of Bressell or Breazle in Bratton Clovelly and also one third of Comb Park, which was situated partly in each of the parishes of Bratton Clovelly, Broadwoodwidger and Thrusselton. His son, John (c.1632-1675), married Temperance, the daughter of William Moore of Moore and now called himself a gentleman.  In 1668, John acquired a further leasehold interest in Comb Park.  Both John and Temperance, who had three children, are buried at Bratton Clovelly church in a very fine tomb with a coat of Arms with emblazonments.

Their only son, another John, (1668-1742), went to Oxford and matriculated at Exeter College on 7th April 1685. His trustees purchased for him the Barton of Witherdon, then in the parishes of Broadwoodwidger and Germansweek, from Thomas Hiern in 1689, and in April 1695, the Bishop of Exeter confirmed that this entitled him to a seat in the church at Broadwoodwidger.  He married Mary Coryndon (d.1740), the daughter of Thomas Coryndon of Bratton Clovelly and Winkleigh, on 3rd October 1690 at Winkleigh.  In his marriage settlement, provision was made for his mother, Temperance, to live at Comb Park and, after her death in 1711, it appears as if John did some significant alterations as there was recorded there a very large water spout in lead with ‘John Luxmoore 1716’ and a rose on each side in very bold relief.  Under the Will of Thomas Coryndon (d.1714), the great tithes of Broadwoodwidger and Germansweek were left to his son-in-law John Luxmoore and these were held by the Luxmoore family until 1907.

John and Mary had eight children.  Their eldest son was also called John (1692-1750).  He became a very successful lawyer and lived in Okehampton.  In 1719, he married Mary Cuningham, daughter of Thomas Cuningham one of the Capital Burgesses and Mercer of Okehampton.  From 1721-1736 he acted as Steward for the Lords of the Manor of Okehampton.  In 1736, he was appointed Assay Master of Tin for the Duchy of Cornwall, and, in 1740, he purchased the leasehold mansion house known as Northmore House or Parade House, which later became the Town Hall of Okehampton.  He also owned Okehampton Castle.  Whilst he inherited Witherdon on his father’s death in 1742, he did not live there and Comb Park, now owned fully, passed to his younger brother, Thomas (1694-1763) - see further below.

John Luxmoore (d.1750) and Mary Cuningham had ten children. Their eldest son was also called John (1726-1788), and he inherited Witherdon and Northmore House.  He also acquired Southweek Manor, for there exists an Abstract of Title to it in his name dated November 1773.  He was also Assay master for tin for the Duchy of Cornwall, was Mayor of Okehampton in 1750 and became M.P. for Okehampton in 1784.  However, he died unmarried and intestate in 1788, and his interest in Witherdon and Northmore House passed to Charles Luxmoore (1762-1793), the eldest son of his brother, Thomas Coryndon Luxmoore (1732-1785). Charles had married Joan Merrifield of Okehampton at Broadwoodwidger, but he died young in July 1793, and his interests passed to his eldest son, Charles Thomas Coryndon Luxmore, born just a few months beforehand in March 1793.

Thomas Luxmoore (1694-1763), the second son of John Luxmoore (d.1742) and Mary Coryndon, who inherited Comb Park on his father’s death, may have lived there since the death in 1711 of his grandmother, Temperance, given that his parents lived at Witherdon and his elder brother lived in Okehampton.  However, as he did not marry until 1761, he did not have children and Comb Park passed on his death in 1763 to the eldest son of his younger brother, Harry (1695-1733), who was also called John (1720-1794), and who, confusingly, married Mary Cuningham, daughter of Christopher Cuningham of Okehampton in July 1750.  On John’s death in 1794, Comb Park passed to his fifth son, Thomas Bridgeman Luxmoore (1761-1844), who was a lawyer and one of the Capital Burgesses of Okehampton and Deputy Recorder.  He married in 1793 Patience, daughter of Noah Cartwright of ‘The White Hart’, Okehampton, and, on his death in 1844, he left Comb Park to his fifth child, John, who took Holy Orders, but who sold Comb Park in 1845 to Richard Abell.

Given that Charles Thomas Coryndon Luxmoore (1793-1863) (“CTCL”) inherited when just a few months old, his interests were run by Trustees until he attained his majority in 1814.  These now included not only Witherdon and Northmore House (sold in 1820), but also the great tithes of Broadwoodwidger and Germansweek.  In addition, he was Lord of the Manors of Southweek and More Malherbe and of Germansweek.

CTCL lived initially with his mother, Joan, at Witherdon, but when he was sent to school in Teignmouth, they moved there, and Witherdon was let out.  His mother, who did not die until 1857, ended her days in Exeter. CTCL was educated further at Eton College and then at St John’s College, Cambridge.  He married in 1822 Frances Brooke, daughter of Thomas Brooke of Church Minshull, Cheshire - a distinguished family whose portraits had been painted by Thomas Gainsborough - and they had two sons and three daughters.  Frances was an artist and did a number of paintings and sketches of family members.

A relative, John Luxmoore, then Bishop of St Asaph, arranged for CTCL to become Vicar of Guilsfield, Montgomery, where he served 43 years.  In view of his absence from the region, the lawyer Thomas Bridgeman Luxmoore (1761-1844) - see above, who owned Comb Park, and who had been a Trustee during CTCL’s minority, continued to act as steward of CTCL’s Devon interests until his death in 1844. 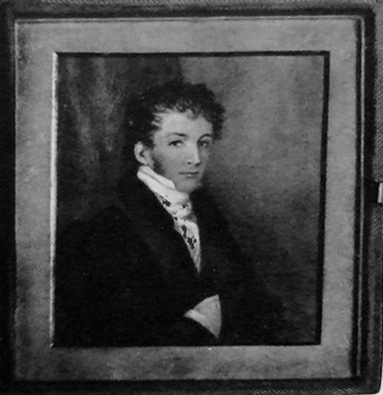 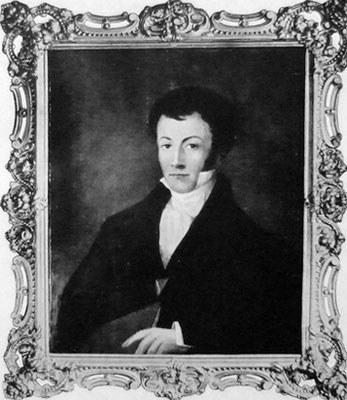 CTCL’s eldest son, Charles (1824-1890), was, accordingly, born in Guilsfield and was educated in Slough and then at Eton before attending Captain Chaplain’s private school at Chateau de Chockier près Liege, Belgium.  He then entered the Army in 1843 and served for many years in Ceylon.  He became Captain in 1855 and ADC to the Governor of Ceylon, but was then sent to India at the time of the Mutiny in 1857-8.  He was actively involved in quelling the uprising and was mentioned in despatches.  He then resumed his role as ADC to the Governor in Ceylon before returning to England in 1863, upon his father’s death, and retiring from the Army in 1864.  Having inherited Witherdon and the great tithes of Broadwoodwidger and Germansweek, he settled at Witherdon and, in April 1868, married Mary Rosalie Carpenter (d.1893), the eldest daughter of the Rev. Charles Thomas Carpenter of Lewitten, near Launceston, who, for many years, was the Curate-in-Charge of Germansweek.  They had a daughter and a son, Charles Frederick Coryndon Luxmoore (b.1872) (“CFCL”), the author of the family history.  In 1884, CFCL’s father inherited the Church Minshull estate in Cheshire from his grandmother’s brother, Henry Brooke, and by Royal Licence, added the name Brooke to his surname. 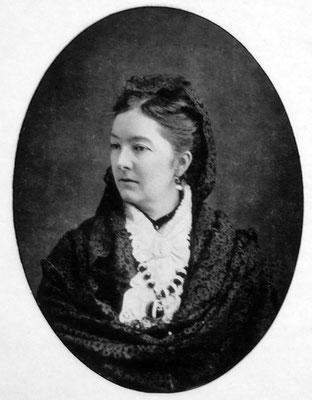 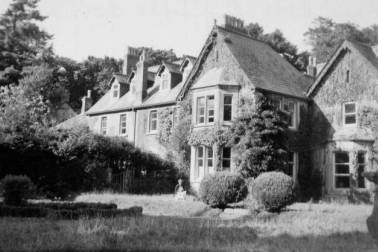 At the time of CFCL’s birth in 1872, his father had pulled down the old house at Witherdon, which may not have been in good repair as it had been let out for over 50 years, and was building a new one there.  Accordingly, he was born in Tavistock.  At the same time, major repairs were being done to the churches at Broadwoodwidger and Germansweek and he was baptised in the latter when it was roofless!  However, within four years of building the new house at Witherdon,  CFCL’s father sold both it and his interest in More Malherbe.  The Witherdon Estates were bought by the trustees of Horatio Carlyon. 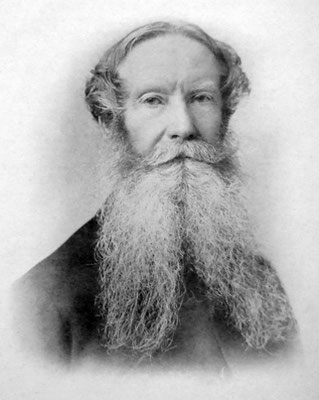 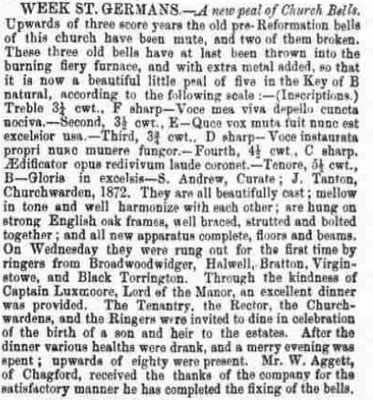 CFCL was educated at Pau in the South of France 1881-3, then at Folkestone 1884 and then at Eton 1886-8.  His father died in Monaco in 1890, and his mother in 1893, the year when he attained his majority, when he decided to disentail his estates and discontinue the additional surname of Brooke.  He indicated that he was still the owner of the great tithes of Broadwoodwidger and Germansweek and the Manor of Broadwoodwidger, as well as much other property in Devon.  In 1897, he married his first cousin, Rosalie Maud Acworth Ommanney and they had nine children.  They lived at Stafford Barton, Dolton.

In 1907, upon the death of Miss Emma Luxmoore (a daughter of CTCL), the Luxmoore family’s entitlement to the tithes of Broadwoodwidger and Germansweek came to an end, and an address was presented to CFCL by the locals in a function at the Hare and Hounds Inn, Broadwoodwidger.  It was indicated that CFCL still owned land in the area and, in the 1940s, his widow sought to sell both Higher Beckett Farm (c.166 acres) and Lower Beckett Farm (c.161 acres), both situated in the Parish.

CFCL became famous in 1928 for his trip up the Amazon into the Brazilian jungle in an attempt to find Colonel Percy Fawcett, who had set off in 1925 with his son, Jack and his friend, Raleigh Rimmel, to search for what Fawcett's termed 'The Lost City of Z'.  CFCL travelled 3000 miles in his quest but was forced to abandon it some 80 miles from Fawcett's last known camp when the rainy season resulted in the rivers becoming unnavigable.  Unlike Fawcett, he concluded that any attempt to hack through the jungle on foot, attempting to survive solely on its fruits, was madness.  He arrived back at Stafford Barton with a range of skins and ancient artefacts and some live exotic animals, which included parrots and two jaguars.  He also brought back his Brazilian interpreter, Jose.  However, the latter soon returned to Brazil being unable to cope with the cold, damp weather of Devon.  CFCL died in 1933, still hailed as "the great explorer".  His widow continued living at Stafford Barton until her death in 1955.

CFCL also traced another branch of the Luxmoore family that originated in the 16th century with Stephen Luxmore of Black Torrington, who appear to have been based in the Ashwater, Broadwoodwidger, Germansweek area for much of the 17th century, for a high proportion of children within this family were baptised at Broadwoodwidger (see p.37 of The Family of Luxmoore).  However, this line seems to have died out early in the 18th century.

David Tovey, with sincere thanks to Marion Perkin