Broadwoodwidger in the News - 19th Century

These snippets of news items from past centuries are intended to give a feel for how life was lived in the Parish in days gone by.  Additions will be made each month and dates of postings are noted so that you can catch up with new postings whenever you like.

Rev John Braddon appointed to the perpetual curacy of BWW, with "the chapelry of German’s Week"

John Dawe proved guilty "beyond doubt"??? and sentenced to death.

Letter from the Archdeacon of Totnes to the Churchwardens of BWW expressing outrage at the situation, where the tithes were in the hands of a layman with no responsibility for providing a residence for the clergy of BWW. Its appearance in a Newcastle paper (and also in the London Evening Standard) shows that it was a subject of wider, national interest.  This tirade resulted from the suggestion that the Church, as owners of the Parsonage (about which interesting comments are made), were responsible for keeping it in good repair!  The tithe holders, the Luxmoore family, were, in fact, well-regarded - see 1907 clipping when their interest came to an end. 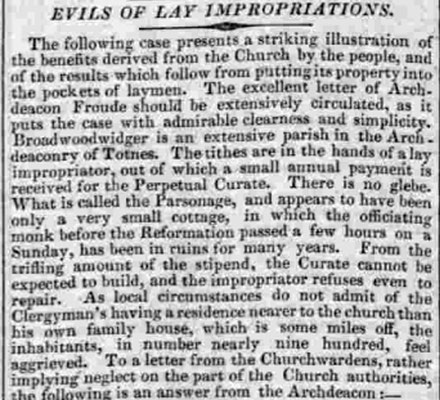 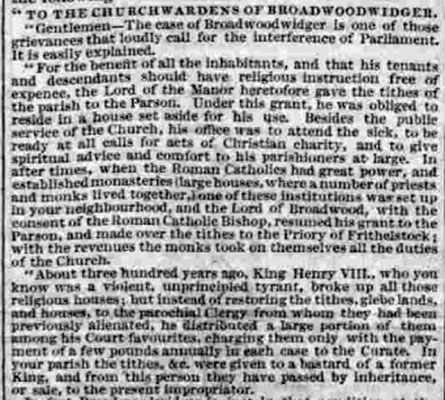 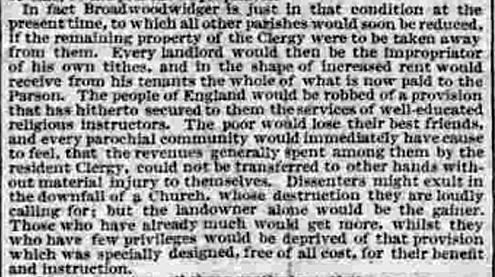 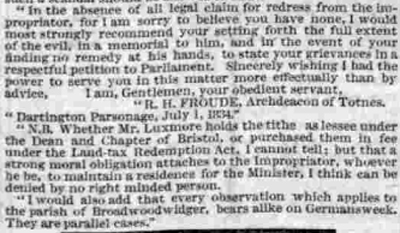 Report of hearing re commutation of tithes.  This records that the Dean and Chapter of Bristol were the tithe holders in fee simple but that their lessee was Rev. C H Luxmoore of Wales, who paid the curate, John Braddon, £23-6-8 out of the tithes.  The Parish acreage was put at 3050 arable, 210 meadow and pasture, 140 woodland and plantation, 1500 commons and 100 orchard.  It was agreed that a Rent-charge of £410 was a fair sum for the Parish.

Bridge over ford at Drowns Mill through private enterprise