Principal Landowners and Estates of the Past

In the Devon section of Magna Britannica dating from 1822, it was said that "the Manor belonged, at an early period, to the ancient family of Wiger".  Certainly, it is known that, in 1288, the Manor was owned in fief by the Wiger or Wyger family.  At that time, a Sir John Wyger was lord of the Manor.  However, on 2nd April 1319, he sold the Manor to Richard de Stapleton, who was a brother of Bishop Stapleton (who was murdered in London on 15th October 1326).  In 1332, Thomas de Stapleton, another brother of the Bishop, gave the Manor (then spelt "Brodewodewyger") to the Priory of Frithlestock.  After the dissolution, the Manor was given to Arthur Plantagenet, a natural son of King Edward IV.  In 1822, it belonged to William Harris Arundel of Castle Park, Lifton (see Broadwoodwidger families - Harris / Arundell family).

The mystery of the murder of a lord of the Manor

An article in the Western Morning News of 20th December 1930 recorded a local legend of the murder at Upcott of one Shilston Upcott, a rapacious lord of the Manor.  It had the headings "Haunted Manor House - Mystery Crime in Sealed Room - Ghostly Visitant of Broadwoodwidger" 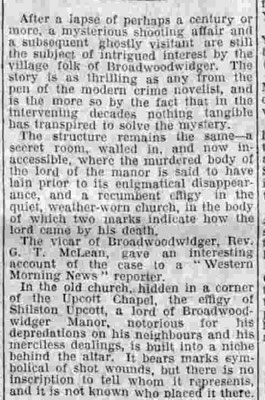 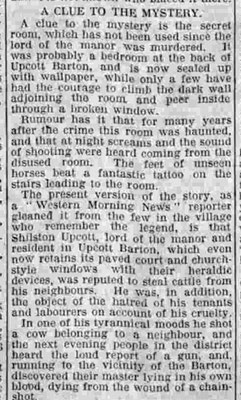 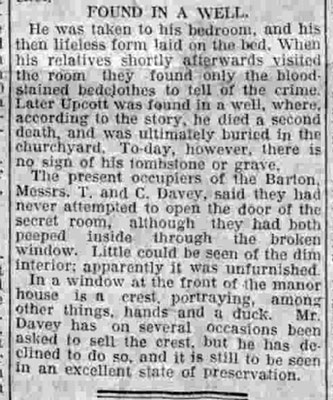 In 1939, this story was investigated further by a Tavistock local historian, L.A.D.Montague, as reported in a further article in the Western Morning News dated 30th October 1939. 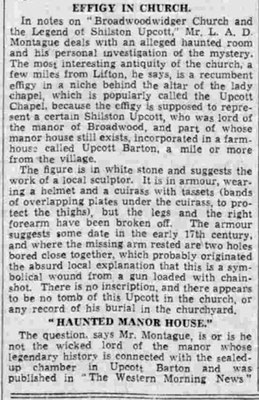 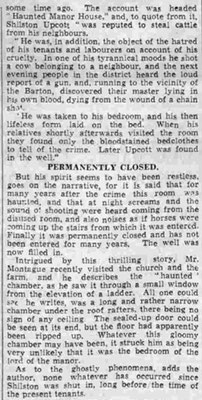 “The manor of More Malherbe was given by the Fitz Stephen family to the hospital of St John of Jerusalem, and by the prior of that house conveyed to the abbey of Buckland in Somersetshire.  After the reformation, it was in the Rolles, from whom it passed, by successive sales, to the families of Kingdon and Luxmoore: it is now the property of the Rev. Charles Thomas Coryndon Luxmoore.”

“The manor of Norden Bason in this parish belongs to the Right Hon. Lord Clinton; the manor of Deanacary (later known as 'Downicary''or 'Downacary'), which belonged to the family of Morice, has lately been sold to the several tenants.

The barton of Upcott belonged to the late Mrs Mackenzie as devisee of Miss Harris of Pickwell, heiress of a branch of the Hayne family; More is the property of Sir Arscott Ourry Molesworth, Bart; and Witherdon of the Rev. C.T.C. Luxmoore: the latter was purchased in 1689, by Mr Luxmoore’s ancestor, of Thomas Hiern, Esq.

For further details of the earlier history of Upcott Barton, when owned by the Tremayne and Harris families, see Broadwoodwidger Properties page - Upcott Barton.

The Rev Charles Thomas Coryndon Luxmoore had inherited his estates, which included Witherdon, More Malherbe, the Manor of Southweek and the great tithes of Broadwoodwidger and Germansweek, in 1793 when just a few months old and they were administered by Trustees until his majority in 1814.  However, he became Vicar of Guilsfield, Montgomery in 1820, where he served for 43 years until his death, and so had little input into his local property interests, which were largely run by a lawyer relation, Thomas Bridgeman Luxmoore (d.1844), who owned Comb Park and worked in Okehampton - see further Broadwoodwidger families - The Luxmoore family.

The Molesworth Baronetcy was created on 19 July 1689 for Hender Molesworth, Governor of Jamaica.  The baronets' principal home was Pencarrow, near St Aubyn, Cornwall and a number served as Cornish M.P.s.  Sir Arscott Ourry Molesworth (b.1789) was the 7th Baronet, but he died on 30/12/1823.  His property interest passed to his eldest son, Sir William Molesworth (1810-1855), the 8th Baronet.   He was educated privately before entering St John's College, Cambridge as a fellow commoner. Moving to Trinity College, he fought a duel with his tutor, and was sent down from the university. He also studied abroad and at Edinburgh University for some time.   He was High Sheriff of Cornwall in 1842.  He became a Radical British politician, who served in the coalition cabinet of The Earl of Aberdeen from 1853 until his death in 1855 as First  Commissioner of Works and then Colonial Secretary.

Details of Broadwood Town Estate, Pote's Tenement, Slue and Burdowns Farm, the Malthouse, the Blacksmith's Shop, the Carpenter's Shop and other dwellings for sale. 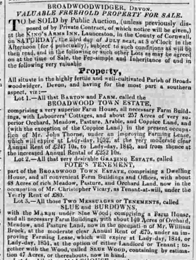 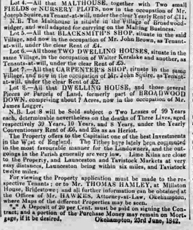 Comb Park straggled three separate parishes - Bratton Clovelly, Broadwoodwidger and Thrusselton.  An interest was first acquired in it in c. the 1620s by the Luxmoore family, when a lease was taken off John Moore of Moore.  A further interest was acquired in 1668 and the property eventually became wholly owned by the Luxmoore family, particularly as John Luxmoore (1632-1675) married Temperance Moore, daughter of William Moore of Moore.  Temperance herself lived there until her death in 1711.  Thomas Luxmoore (1694-1763), John Luxmoore (1720-1794) and the Okehampton lawyer, Thomas Bridgeman Luxmoore (1761-1844), were other Luxmoore family owners, but, after the latter's death in 1844, it was sold in 1845 to Richard Abell - see further Broadwoodwidger families - The Luxmoore family.

For more on Henry Blagrove, for whom Lifton Park had been acquired by a family trust in 1845, see Broadwoodwidger families - Blagrove / Bradshaw family.

For Sir William Molesworth - see above.

Details of what Upcott comprised are contained in an 1863 advert for a new tenant to take over from Messrs Northcott.  In 1879, when it was for let again, the tenant was said to be John Gerry.

On the death of the Rev C.T.C. Luxmoore in 1863, his son, Charles Luxmoore, who had been serving in the Army in Ceylon returned to England and lived in Witherdon House, which had been let out for some fifty years.  In the early 1870s, he decided to demolish it and build a new property there, but, within four years, put it up for sale, along with the Manors of More Malherbe and of Southweek.  Witherdon was bought by Trustees for Horatio Carlyon - see further Broadwoodwidger families - The Luxmoore family. 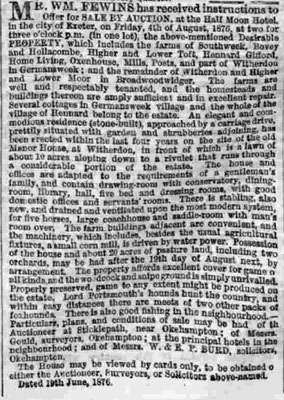 1879 History Gazetteer & Directory of the County of Devon

John Gubbins Newton was born in Bridestowe c.1827 and lived there, unmarried, at Millaton House.  He owned property all over the region but got into financial difficulties in 1879 after the failure of the West of England Bank and was made bankrupt in 1880 (see Exeter Flying Post, 12/11/1879 at p.7).

Mrs Woodley was Emily Jane Woodley (1825-1911), the widow of retired Naval Captain Augustus John Woodley (1813-1876) of 'Didworthy House', South Brent.  It appears that he may have acquired Upcott Barton for his son, George, but he advertised for a new tenant in 1873.

Lady Molesworth will possibly be Andalusia Grant Carstairs Molesworth, the widow of Sir William Molesworth (d.1855) - see above. They married on 9 July 1844 and she died in 1889.  However, William's successor to the baronetcy died in 1862, and so it might be his widow.

The 1881 Census records Alexander Macbeth and his wife, Jessie, as both being aged 44 and born in Scotland.  They ran 410 acres at Kitcham and employed 9 labourers.  They had no children.  However, in 1878, he had been listed as a yeoman living at Fernhill.  He was the first Chairman of the Broadwoodwidger Rural District Council, formed in 1894, became a J.P. in 1895 and served until 1904 on the Launceston Board of Guardians.

The Scot, James Oag (1836-1912), had acquired the 340 acre Thorndon House estate in the late 1870s and lived there until 1905, when he moved to Okehampton.  A civil engineer, who had worked for some years in India, he and his much younger wife, Mary, whom he had married in 1875, had six children, five of whom were born at Thorndon House.  He was very involved with the North Cornwall Railway Company, was managing director of the Old Delabole Slate Company, a J.P. and eventually a County Alderman - see further Broadwoodwidger families - The Oag family).

1890 History Gazetteer & Directory of the County of Devon

In the 1893 Kelly's Directory, John Hall, of Kellacott, was called 'the lord of the manor', and other principal landowners were listed as Horatio Carlyon (who had acquired Witherdon), Frank Bradshaw (of Lifton Park), Lady Ashburton, and Henry Fairfax Harvey.

Mrs Gamlen was Elizabeth Gamlen, daughter of John Blagdon of Puddington and widow of William Hornsey Gamlen, who had died on 6th April 1885, aged 71.  They had lived initially at Hayne, Tiverton and then Brampford Speke, Devon.  She died on 13th March 1894, aged 79.  Presumably, William Gamlen had acquired Broadwood Town Estate after J.G.Newton's bankrupcty in 1880.

RCG reported in 1/11/1894 at p.7 that "the well-known sporting estate of Upcott Barton", comprising some 500 acres, had been sold privately.

By the 1901 Census, Alexander Macbeth was a widower and a magistrate.

In 1891, Lord Clinton, then Lord-Lieutenant of Devon, sold "the fine sporting and agricultural estate of Norton Bason Manor", comprising some 1200 acres, to a John Hall of Breakworth Hall, near York.  However, in November 1894, Hall put the estate up for sale by auction in small lots. 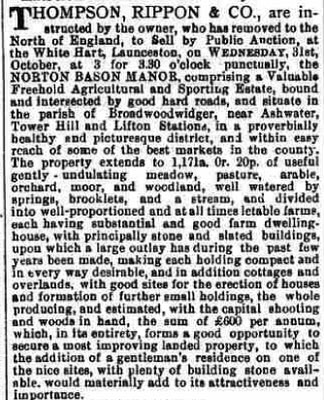 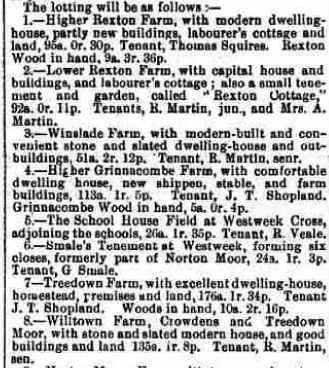 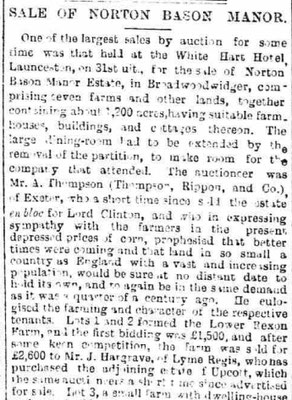 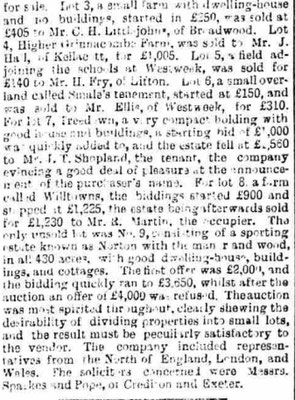